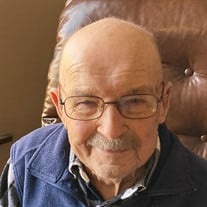 Elroy was born on August 15, 1928, the son of the late Oliver and Sylvina Brommer.

On June 24, 1950, Elroy was united in marriage to Betty Baader at Lyster Lutheran Church, Urne, WI where he was a lifetime faithful member and over the years served on the church council, played on the dart ball league along with many other capacities.  His church was a very important to him.

Elroy was a crane operator for 41 years.

During the winter months, Elroy would drive semi for Lake Pepin Fisheries.

Elroy was a lifetime member of the Sons of Norway and was proud to have been able to speak Norwegian and to have traveled to Norway locating his grandfather’s home place.  He was a very civically minded resident of the Village of Nelson, serving as the Village President for over 40 years along with years of dedication as the fire chief for the Village as well.  He was also an active and influential member of the Nelson Lions Club and took pride in the multiple trips to Mexico with their eye glass program.

Elroy will be remembered for his love of antique tractors, traveling, hunting and fishing, woodworking and farming, but mostly spending time with his loving family.

Besides his parents, Elroy was preceded in death by his loving wife, Betty; brother, Robert along with multiple family members.

A memorial service will be held on Saturday, June 18, 2022 at 11:30 am at Lyster Lutheran Church with Pastor Michael Vetsch officiating.  Inurnment will be at the church cemetery followed by a luncheon and fellowship at the parish hall.  A memorial gathering will be held at the church on Saturday from 10:30 am until the hour of the service.

The family asks that memorials in Elroy Brommer’s name be directed to Lyster Lutheran Church.

To order memorial trees or send flowers to the family in memory of Elroy Abner Brommer, please visit our flower store.

At intersection of County Road F and D, Town of Nelson, WI

At intersection of County Road F and D, Town of Nelson, WI