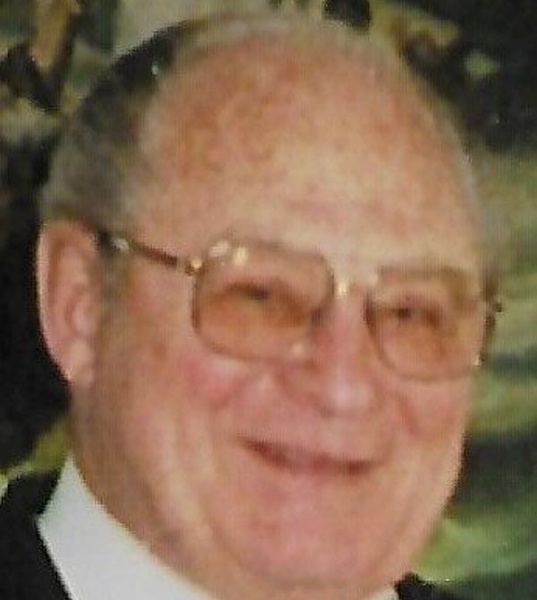 Arnold (Arnie) Poeschel, 90, of Mondovi, Wisconsin, passed away peacefully on December 6, 2021 at the American Lutheran Communities in Mondovi, Wisconsin with family by his side.
Arnie was born November 25, 1931 in Durand, Wisconsin to Walter and Christina Poeschel. He attended school in a one-room schoolhouse in the township of Canton, which is now the Canton Town Hall, just down the road from where he grew up. In his early years, Arnie developed a passion for trucking which was inspired by his Uncle Bill. During his long trucking career, he hauled cattle with his Uncle Bill, owned a canned milk route, drove school bus and 18-wheelers, and owned and operated his own over-the-road trucking company. He also enjoyed farming and loved the 10 years he farmed on the “bluff.” He ended his career in his beloved fire-engine red semi which he proudly displayed “Grandpa’s Toy” across the front. The loves of his life were without a doubt his grandchildren. He was often caught pushing his love of horses on them, even offering to buy horses and ponies for them against the wishes of his children. He worked incredibly hard throughout his life instilling this trait in his children.
Arnie loved good food and enjoyed taking his loved ones out to eat. You could often find him at the Mondovi Inn or Blondies with at least one loved one with him. For as much as he enjoyed going out to eat, he will be remembered by his family for his famous potato dumplings he cooked for them. When trying to encourage his grandkids to try new food, he would often use the selling point that it would “put hair on your chest,” a selling point that didn’t appeal to his granddaughters. Arnie enjoyed talking to and joking around with people and was quite the card player. If you asked him to play cards, you couldn’t pull the chair out quickly enough for him to sit down. Most would shake their head at how he played, often infuriating those playing against him when he made his bid, and he loved it. However, his grandkids may have learned a few choice words when the cards didn’t fall his way. Grandpa will be remembered by many of his grandchildren as their “dollar grandpa” because he would usually pull out his wallet and give them a dollar every time he saw them. Arnie was a kind, stubborn, loving, straight-forward man who will be missed immensely by those who loved him.

To order memorial trees or send flowers to the family in memory of Arnold Poeschel, please visit our flower store.